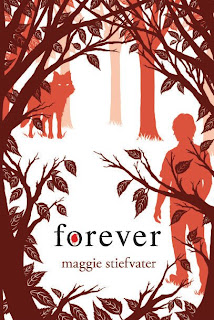 In Maggie Stiefvater's Shiver, Grace and Sam found each other. In Linger, they fought to be together. Now, in Forever, the stakes are even higher than before. Wolves are being hunted. Lives are being threatened. And love is harder and harder to hold on to as death comes closing in.

The POV’s alternate between Grace, Sam, Cole, Isabel and a surprise voice who opens the story of FOREVER. I can’t say which character captured me most. They all had something about them which made me love them even more, as individuals and as part of the various relationships.
I like them all so much, but I must say that I was mostly craving for more Cole, this man is really an addiction. Sam and Grace, Isabel and Cole are so great together. Still I wished for more moments between Cole and Isabel. Their scenes always ended when they were at their highest.

Poetry is not my favourite type of text, still Sam’s reciting make the novel an even stronger part of the series. Sam’s beautiful texts, whispered words and sung lyrics always made me go all fan girl. In duet with Cole, these two boys are definitely my favourite fictional band.

The story around the teens and wolves feels so natural and although sad things are happening Maggie’s writing feels comforting and just right. Her describing the wolves, their interactions and wolfish voices felt  real. She puts words together and somehow they form this beautiful mass of something that makes sense and affects you.

The ending left me with mixed feelings. It was the final to a much-loved series and I felt gratitude towards Maggie for creating the world of the Mercy Falls wolves. Then it left me utterly disappointed at the same time. I never considered Maggie as a writer of stereotypical happily ever afters, but I hoped for a different last sentence, maybe even last few chapters.

It was just so unsure, open and very sad (which is of course a more than acceptable feeling to evoke after the incidents of FOREVER). I just wish the open end as I see it, leaves room for another book in the series (despite Maggie’s goodbyes).

FOREVER has so many awesome swoon-worthy and fantastic emotional moments. I didn't want the story to come to an end!

* Don't forget to check out Maggie's other books!

* Thank you Maggie for choosing my tissue as a FOREVER ARC winner. Again huge thanks to Loni for forwarding me the book!
Posted by Miss Page-Turner at 6:14:00 PM