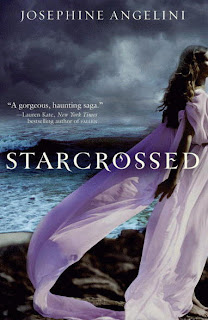 How do you defy destiny?
Helen Hamilton has spent her entire sixteen years trying to hide how different she is—no easy task on an island as small and sheltered as Nantucket. And it's getting harder. Nightmares of a desperate desert journey have Helen waking parched, only to find her sheets damaged by dirt and dust. At school she's haunted by hallucinations of three women weeping tears of blood . . . and when Helen first crosses paths with Lucas Delos, she has no way of knowing they're destined to play the leading roles in a tragedy the Fates insist on repeating throughout history.
As Helen unlocks the secrets of her ancestry, she realizes that some myths are more than just legend. But even demigod powers might not be enough to defy the forces that are both drawing her and Lucas together—and trying to tear them apart.

STARCROSSED and I didn’t have the best start. I had to adjust to Angelini’s writing style first. Then protagonist Helen seemed like a very static character and the things happening to her were more than strange and inexplicable.

I don’t know on which page, maybe I was about 70 pages into the story, but suddenly I connected to it. I wanted to know what was about to happen to each character, see how they interact and what the Greek mythology references were about.

Helen and Lucas are equal when it comes to their status as supernatural beings. I really liked that this paranormal love is about two equal lovers. They fall in love, they both want each other and although they are equal their love is yet another one forbidden. Angelini involved pretty interesting concepts of the correlation between love and hate.

She also built great tension and I couldn’t wait for Helen and Lucas to get their special moment. When it was finally there…the tension just puffed. I hoped for a more vivid display of romantic scenes and still hope for that in the sequel (I'm sure Josephine Angelini will do a fab job).

We got many characters and they felt like a huge family to me, so familiar and fun. I liked all of them so much. They all have talents that relate to ancient Gods. We also got the oracle of Delphi. Their talents fascinated me, the powers of Gods or semigods seem endless.

4,5/5 ****/* STARCROSSED- Original take on the Greek mythology and home of the fantastic love story of Helen and Lucas. That’s exactly the way history can be a lot of fun!

STARCROSSED is the first of many Greek mythology themed books being released right now and it was the best to start with. I’m eager to learn more about the Greeks and Lucas’ and Helene’s love story in the much anticipated sequel!

* Thanks to Netgalley and Harper Teen for allowing me access to STARCROSSED!