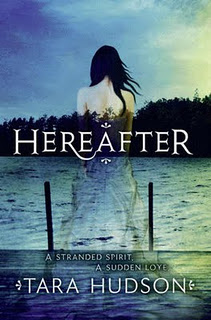 Can there truly be love after death?

Drifting in the dark waters of a mysterious river, the only thing Amelia knows for sure is that she's dead. With no recollection of her past life—or her actual death—she's trapped alone in a nightmarish existence. All of this changes when she tries to rescue a boy, Joshua, from drowning in her river. As a ghost, she can do nothing but will him to live. Yet in an unforgettable moment of connection, she helps him survive.

Amelia and Joshua grow ever closer as they begin to uncover the strange circumstances of her death and the secrets of the dark river that held her captive for so long. But even while they struggle to keep their bond hidden from the living world, a frightening spirit named Eli is doing everything in his power to destroy their newfound happiness and drag Amelia back into the ghost world . . . forever.

Amelia awakes from one of her numerous nightmares…except it isn’t. The nightmare is reality, she is dead, a ghost and is just about to meet the love of her…well, you know afterlife.

Josh is an ordinary human with a near death experience and when he meets Amelia his entire life changes…except it doesn’t really.

When he sees Amelia for the first time he isn’t really frightened, but just gives in to the things he sees. I absolutely loved the fact that he isn’t scared or thinks that he is crazy when he sees the ghost of Amelia. Their first meeting is thrilling and somehow natural and even magical.

They also experience that they are not supposed to be together when Joshua learns about his true nature, too. The romance between Amelia and Joshua was still so easy and a nice change to the chaotic and turbulent relationships of many YA couples.

Characters of both families are involved, the living boy and the dead girl and a bunch of otherworldly and ghostly beings. HEREAFTER also offers various enemies to potentially come between Joshua and Amelia’s love.

Amelia is a ghost. But not exactly the concept of ghost we are familiar with. She has almost no memories of her past life and until she meets Joshua only exists through her nightmares. Hudson reveals an enjoyable concept of the hereafter, a struggle of powers within the dark realms and the mission to recruit as many souls as possible.

I was immediately hooked to the story, the first few chapters felt so exciting and full of mystery. Tension is perfectly built within chapters and throughout the whole story. I can definitely name it my favourite ghost story!

* Read an excerpt of HEREAFTER here.

* Thanks to Netgalley and Harper Teen for allowing me access to the e-galley of HEREAFTER!