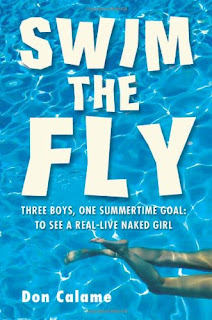 Three adolescent boys with a single goal: see a real-live naked girl. The result? Razor-sharp, rapid-fire, and raunchy, of course. And beyond hilarious.

Fifteen-year-old Matt Gratton and his two best friends, Coop and Sean, always set themselves a summertime goal. This year's? To see a real-live naked girl for the first time — quite a challenge, given that none of the guys has the nerve to even ask a girl out on a date. But catching a girl in the buff starts to look easy compared to Matt's other summertime aspiration: to swim the 100-yard butterfly (the hardest stroke known to God or man) as a way to impress Kelly West, the sizzling new star of the swim team.

I’m glad Don Calame’s wife made him write this book, she seems to know her husband’s humour all too well and had the right believe that others would immediately fall for it. This girl fell for your husband’s writing and the three boys who want to see a real life naked girl. What a funny premise!

Matt, Cooper and Sean’s attempts to see a real life naked girl are awesome. Throughout the entire novel I felt entertained and often had to laugh out loud. You won’t believe what these boys go through to get their girl!

Matt’s voice is fantastic, you simply have to like him. He wants to succeed so badly, that the joke’s often on him.
Several strings of action are interwoven, like Matt wanting to swim the fly, his attempts in love, the boys’ hunt for a naked girl and even Matt’s Grandpa Arlo has something  going on.

The plot of swimming and getting the girl is well balanced. I would want some more romance, but since it’s such a boyish read I totally accept the fun and action focus.

Don Calame applies a youthful writing and the voices of his characters are realistic. SWIM THE FLY is a hilarious book and the jokes totally hit my humour nerve, though the parental advice is definitely justified.

I can’t wait to read the sequel to SWIM THE FLY which will be told from Coop’s point of view! I love Matt, but Coop’s the real head of witty and dirty talk. The story being told from his POV, promises to be even more fun.

1) of a guy’s best first kiss ever
2) of the prettiest girls in town
3) of the Community Center incident
4) of adventures, dares and a ton of fun
5) it’s the way that makes achieving a goal worth it

This novel makes me want to be a boy! Sounds weird, but Matt, Sean and Coop are just too hilarious. SWIM THE FLY is all about friendship, fun and boyish dares! Boys will love it, but girls even more ;)

* Don’t forget to check out BEAT THE BAND, the next novel in the SWIM THE FLY series!

* Read an excerpt of SWIM THE FLY here.

* Click here to watch the SWIM THE FLY book trailer.

* Thanks to Templar Publishing for sending my a review copy!