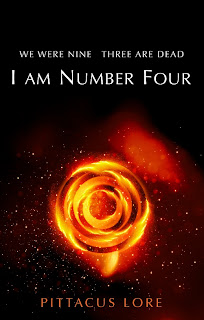 ~ The Author ~
My name is Pittacus Lore. I am a Loric Elder, from the Planet Lorien, which is three hundred million miles away. I am approximately ten thousand years old. I have been to earth hundreds of times, and I am here now.
Fun author profile by I Am Number Four.co.uk
Pittacus Lore is the pseudonym for the writing duo James Frey (author of "A Million Little Pieces") and Jobie Hughes.
~ The Novel ~
I Am Number Four is the first novel in The Lorien Legacies series and was published August 2010. The sequel to I Am Number Four is The Power of Six and will be released in 2011.
For more information visit http://www.iamnumberfour.co.uk/
~ The Story ~
There were nine. Three are dead. I Am Number Four.

Nine teenagers and their guardians are hiding on Earth … protected by a charm that means they can only be killed in numeric order, three are already dead. John Smith is Number Four. And his mortal enemies, the Mogadorian, are hunting him down.

The only way to keep off radar is to keep moving, never staying in one place for long. Finally in the firing line, all he can do is adopt the guise of a student and pray his unusual gifts – his legacies home; Planet Lorien – stay hidden long enough for him to settle into this new community.

But others seem to sense his otherness and when small-town life sucks him into its intrigues, it’s only a matter of time before his true nature is revealed. And that means there’s no space for love, friendship or a future if it means protecting not only himself, but the other five …
Summary by Goodreads
You can read an extract here!
Want to find out what’s your legacy? Take the fun test here!
~ The Review ~
Usually I am not a fan of science fiction novels, but after reading and liking The Host by Stephenie Meyer so much last year I opened up a bit for this so far unknown genre. When I watched the I Am Number Four movie trailer I knew I had to read the novel first before I watch this awesome looking movie.
Behind the novel I Am Number Four stands the extraordinarily interesting concept of a group of alien teenagers with special powers that is sent to earth in order to survive, protect our world, grow strong and defeat their hunters one day.
I Am Number Four is told from John’s point of view and although he isn’t from this world his thoughts and feelings doesn’t appear so alien. He is a strong character who fights for his believes and planet. Very likeable about John and his mentor Henri and are their peaceful intentions, they are superior but do good.

I immediately felt a connection to our protagonist John, who is an alien and has always been a loner so far due to his strict movement schedule as a hunted Lorien. He is the type of boy I would love to welcome in my circle of friends, arms and heart. Although he must be ten times stronger than any human I want to protect him from his loneliness and give him the save haven he has been searching for so long. He has already found a great fan in me!
The story around John arriving in a new town, building up a human façade and getting comfortable with new friends is a good placed contrast to the overall looming danger through the Mogadorians. Although John got to take his time with falling in love with the female protagonist Sarah on the one hand, he is under a permanent stress and danger to be found by his enemies on the other. The story is action-packed and completed by the steadily growing love story between John and Sarah.
Single chapters often don’t merge into each other seamlessly which takes away coherence and regular pace. Lore’s writing style is solid but without any artful ornaments or rich metaphors. His writing style supports the character of a science fiction story, but doesn’t fit my expectations one hundred percent.
I found it exciting to learn more about Loric traditions and the life on Lorien before it was destroyed. The elements we expect science fiction themed novels to contain are space rockets and aliens and I Am Number Four obviously features both. But it isn’t a plain novel, just containing the obvious elements and no other content. I Am Number Four shows fascinating new features like legacies, special powers John develops with growing strength in physics and personality. In addition there is a bond between those nine teenagers sent to earth which protects them all so that they can only be killed in a certain order.
The constellation of nine alien teenagers being hunted by their enemies, the Mogadorians, combined with Loric magic has such a great suspense potential. John’s mysterious powers develop gradually and there are many more secret gifts hidden.
~ We love this book because… ~
1) we want to have our own super dog
2) of the best cêpan in the world
3) we check each chest we find if it unlocks by the touch of our finger
4) we enjoy hay rides
5) you don’t need to use alien powers to get the girl, but sometimes they can be useful to keep her alive
~ The Verdict ~
I Am Number Four starts with a slow pace in the beginning just to end with a serious grand battle, but it is captivating all the time. This novel is like an adventure quest I would like to play on my games console.
~ Want to watch the movie trailer that made me want to read I Am Number Four? ~
Posted by Miss Page-Turner at 4:38:00 AM