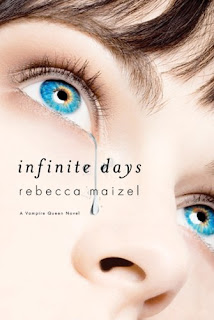 Lenah Beaudonte is, in many ways, your average teen: the new girl at Wickham Boarding School, she struggles to fit in enough to survive and stand out enough to catch the eye of the golden-boy lacrosse captain. But Lenah also just happens to be a recovering five-hundred-year-old vampire queen. After centuries of terrorizing Europe, Lenah is able to realize the dream all vampires have -- to be human again. After performing a dangerous ritual to restore her humanity, Lenah entered a century-long hibernation, leaving behind the wicked coven she ruled over and the eternal love who has helped grant her deep-seated wish.
Summary by Goodreads
And #2 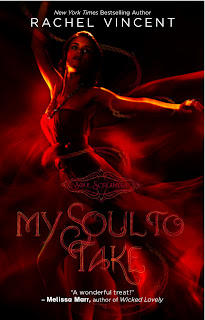 My Soul To Take by Rachel Vincent
I didn't notice this series before I saw the stunning cover of My Soul to Take everywhere around the blogosphere. How could I ignore it before? It sounds like a future favourite novel of mine!
She doesn't see dead people, but
She senses when someone near her is about to die. And when that happens, a force beyond her control compels her to scream bloody murder. Literally.
Kaylee just wants to enjoy having caught the attention of the hottest guy in school. But a normal date is hard to come by when Nash seems to know more about her need to scream than she does. And when classmates start dropping dead for no apparent reason, only Kaylee knows who'll be next
Summary by Goodreads
Posted by Miss Page-Turner at 5:16:00 AM