Several months ago, Cassandra Clare announced three additional novels to The Mortal Instruments series, City of Fallen Angels, City of Lost Souls and City of Heavenly Fire, and since then we've not only been waiting for the second cycle in the TMI series to be written and released but also for our most anticipated 2011-release-novel aka City of Fallen Angels to get a face. Entertainment Weekly has revealed the new cover of the 4th instalment in The Mortal Instruments series which will be published April 5th 2011! Do I need to say what I think of it? It's fantastic!
...Here comes the highly anticipated City of Fallen Angels COVER... 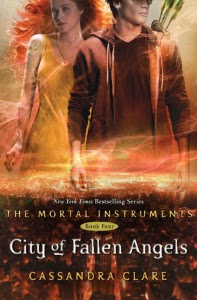