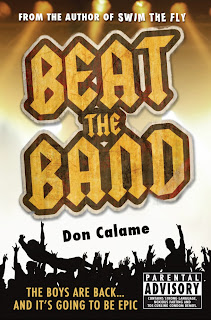 In this hilarious sequel to SWIM THE FLY, told from Coop’s point of view, it’s the beginning of the school year, and the tenth-grade health class must work in pairs on semester-long projects. Matt and Sean get partnered up (the jerks), but Coop is matched with the infamous "Hot Dog" Helen for a presentation on safe sex. Everybody’s laughing, except for Coop, who’s convinced that the only way to escape this social death sentence is to win "The Battle of the Bands" with their group, Arnold Murphy’s Bologna Dare. There’s just one problem: none of the guys actually plays an instrument. Will Coop regain his "cool" before it’s too late? Or will the forced one-on-one time with Helen teach him a lesson about social status he never saw coming?

In SWIM THE FLY we followed the story around the three friends Matt, Sean and Coop. We’ve got them back in BEAT THE BAND, now told from Coop’s point of view. Dirty mind Coop is talking so double notice the parental advice on the back of the book!

I was looking forward to hear Coop’s voice after Matt kind of found his happy end in SWIM THE FLY. BEAT THE BAND shows that his mind is exactly as dirty and wicked as I remembered from SWIM THE FLY. It’s great to finally have a character like Coop in the YA scene, because I like the way he thinks.
He goes through a major change of personality and his way of thinking which wasn’t very surprising and was to be expected, but still fascinating to see. Helen seems to bring out the best in him and somehow disable the connection from his pants to his brain. So in the course of the story he actually starts thinking with his upper body brain.

Music makes up a big part of the story since the boys decide to win the battle of bands. There’s also a string of action circling around Coop’s family or more his currently unemployed father.
Other than his funny jokes and winning the band contest, the blooming relationship between Coop and social outcast Helen is of high interest. Helen is a very convenient character and because she’s such a strong young girl it’s not difficult to like her. With the two of them we’ve got two strong contrasted characters with a lot of delicious tension between them.
The story also circles around sex and I felt that Don Calame totally represented the youth view of a boy on the topic.

BEAT THE BAND follows a similar scheme as SWIM THE FLY. And I must say it is exactly as badass as the first book in the series. What I like better about BEAT THE BAND is that Calame lays a larger focus on the major love story.

This book has a nice mix of topics to offer, with a protagonist searching for love, a group of boys following a common goal and many pranks, high-school intrigues and issues of all kinds. There are a lot of new funny actions that make BEAT THE BAND a funny delight.

* Don’t miss the third book in this series, CALL THE SHOTS ( title could change before publication)!

* Read an excerpt of BEAT THE BAND here.

* For further information about Don Calame and his works visit www.doncalame.com

* Thanks to Templar Publishing for sending me a copy of BEAT THE BAND for review!