On Valentine's Day Kimberly Derting posted this THE LAST ECHO teaser on her blog. Click here. I so cannot wait for this next novel in the THE BODY FINDER series!

I love Jay so so much and cannot thank Kimberly Derting enough for writing this super amazing love letter. It makes me love Jay even more, if that's even possible!!! What do you say?
To read the love letter scroll down!!! 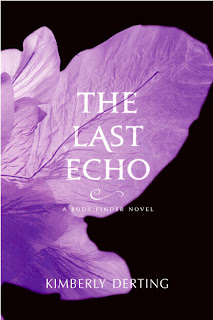 Jay grinned, reaching for one of the cups. Violet sat down on the curb, just like they used to do as kids, and lifted her straw to her lips.
“I’m glad you came,” he said, serious now, following her lead and dropping onto the curb beside her.
Violet leaned against him, just enough so their shoulders were touching, and felt a different kind of spark, the kind forged from years of connection. This was where she belonged. This was where she should always be. With Jay.
“So how was your appointment? With the shrink?” He was frowning as he looked down at her, his lips already turning red. His face creased with worry.
“It was good,” she said, taking a long pull from her own straw and swirling the sweet, syrupy ice around her tongue. “It—it helped to talk to him.” She didn’t tell Jay about the pills Dr. Lee had given her, the ones in her pocket, pressed against her thigh at this very moment. Pills felt like failure to her. Like admitting she couldn’t handle this on her own. That willpower wasn’t enough . . . even though, clearly, it wasn’t. “But, you know, I still don’t feel great. I was hoping that seeing you might make things . . .” A tiny smile tugged at her lips as she shrugged. “. . . better,” she finished.
She knew he’d understand what she was telling him: that the echo of the dead girl was weighing on her still.
After a hesitant pause, Jay set the wax-coated cup on the sidewalk next to him. He leaned down and pressed the barest whisper of a kiss against the top of Violet’s dark curls. Despite the icy sensation of his lips, heat unfurled in Violet’s belly, licking through her. “I hate this, you know.” Absently, he reached for her hand, lifting it and flipping it over as he studied her palm. His thumb ran along the grooves there, and then his eyes moved up to meet hers. “I hate that you have to do all this without me. Maybe it would be better if you spent less time there . . . with them.”
Violet wished he’d just say it, what he really meant. “He’s not that bad, Jay. He’s just trying to help.” She knew that neither of them was talking about Dr. Lee now. This was about Rafe.
She looked at him, taking in a face that was almost more familiar to her than her own. His golden features, his warm eyes, his slightly too-long hair with the faintest curls dropping past the tops of his ears and brushing his neck. He looked so hurt, so vulnerable, and she blamed herself.
He touched her cheek; his hand was as cool as his lips had been. “I just worry that he’s careless. I don’t know if I trust him, Vi.”
“He saved me once. What more do you want?”
“I want to know that he’d protect you the way I would if something happens. That he has your best interests in mind.” And then he sighed, a ragged, defeated sound. He ran his hand through his already rumpled hair. “That’s a lie. I want my girlfriend to stop spending so much time with another guy. I wanna know that you two don’t share some sort of bond because of what you can do. But what I really want is to know that he doesn’t have feelings for you.”
Violet was speechless. She had no idea how—or what—to say to any of that. She could defend her relationship with Rafe by saying that they only worked together, but it wouldn’t matter. Partly because she’d be lying. Of course they shared a bond, one Jay could never truly understand. And she certainly wasn’t going to quit the team because of that.
But it was that last part, the thing about Rafe having feelings for her that really made her pause. Rafe didn’t like her, not in the way Jay meant.
Fortunately for Violet, she didn’t have to speak because Jay wasn’t finished yet. “But, honestly, you know what bothers me more than anything?” She shook her head, and he continued, his voice so low it sounded like a whisper rumbling up from his heart. “It’s that I can’t do anything for you when you’re in this kind of pain, Vi.”
Eyes wide now, Violet released the shaky breath she’d been holding.
Jay leaned forward, resting his forehead against hers while he scooped up both of her hands and squeezed them tight. As their breath mingled Violet wondered when she’d set her own cup down. They remained there like that—like marble sculptures—frozen nose-to-nose, mouth-to-mouth.
Then she felt his lips move against hers, and she closed her eyes when he whispered, “I wish I could make things better. I wish I could stop you from hurting.”
Love Note From Jay to Violet

Violet, I don’t know if there was an exact moment when I first knew that I loved you, but I can’t actually remember a time when I didn’t. You’ve been my best friend for so long that it’s impossible for me to imagine there could ever be anyone else. I know things about you that you probably don’t even know about yourself. And no, Violet, I’m not talking about your “special ability”. I notice the way the sun reflects off your curls and the way you look when you’re first waking up and the little creases between your eyebrows when you frown or laugh. And, mostly, the way you look at me, like you don’t quite believe me, when I tell you how much I love you. But I do. Forever and always, I will love you, Violet Ambrose. More than I can say. More than I’ll ever be able to explain to you. More than you’d even believe, probably.
You mean everything to me… you always have. Jay