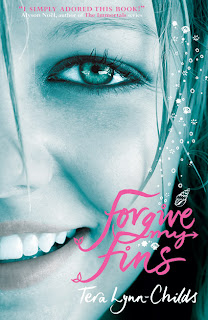 Lily Sanderson has a secret, and it’s not that she has a huge crush on gorgeous swimming god Brody Bennett, who makes her heart beat flipper-fast. Unrequited love is hard enough when you’re a normal teenage girl, but when you’re half human, half mermaid like Lily, there’s no such thing as a simple crush.

Lily’s mermaid identity is a secret that can’t get out, since she’s not just any mermaid – she’s a Thalassinian princess. When Lily found out three years ago that her mother was actually a human, she finally realized why she didn’t feel quite at home in Thalassinia, and she’s been living on land and going to Seaview high school ever since, hoping to find where she truly belongs. Sure, land has its problems – like her obnoxious, biker boy neighbor Quince Fletcher – but it has that one major perk – Brody. The problem is, mermaids aren’t really the casual dating type – when they “bond,” it’s for life.

When Lily’s attempt to win Brody’s love leads to a tsunami-sized case of mistaken identity, she is in for a tidal wave of relationship drama, and she finds out, quick as a tailfin flick, that happily-ever-after never sails quite as smoothly as you planned.

FORGIVE MY FINS was my very first mermaid novel and I found it really refreshing to have yet another fantastic paranormal being to meet!

We follow Lily who is not only a mermaid, but in fact princess of the sea. She spent the last year on land to learn more about life out of sea and to find her prince. She’s living with her aunt and has a best friend and she  also has a pretty normal human life to live. Our splashy narrator is an impulsive person. In general I liked her, her behaviour and way of thinking were sometimes just too infantile.

The main focus lies on Lily’s boy issues. There are two. Her true love Brody Bennett and neighbour Quince. Both guys are different in personality and it wasn’t very difficult to root for one guy after only a few chapters.
What I really liked about FORGIVE MY FINS is the concept of a kiss binding the mermaid Lily to her chosen prince. It’s a very romantic and magical idea, which will of course confront Lily with a bunch of problems in the course of FORGIVE MY FINS.
Tera Lynn Childs created an enjoyable concept of sea people and story, because there is no typical conflict between land and sea. Lily is even encouraged to spend some time on land and follow her dreams. So this story is told in a rather peaceful and relaxed atmosphere. We get an insight in both worlds and are provided with many details and customs of the sea folk.

Join Lily and her chosen boy on their cheerful underwater adventures. If you haven’t read a mermaid novel before you should definitely add this paranormal being to your reading repertoire.

FORGIVE MY FINS is told in a light and humorous style which makes it an easy and fun read. The story around Lily feels aimed at a younger audience, yet I found it quite enjoyable for all YA fans.

* Don’t miss FINS ARE FOREVER, the sequel to FORGIVE MY FINS!

* Read an excerpt of FORGIVE MY FINS here.

* For further information about Tera Lynn visit www.teralynnchilds.com
* Thanks to Templar Publishing for sending me a copy of FORGIVE MY FINS for review!