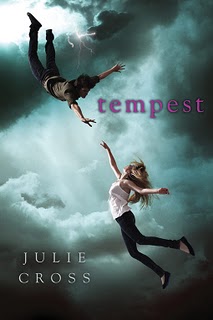 Jackson and Holly are one of my favourite YA couples of all time, because from the first page on they felt like close friends to me. It’s convenient that they are already a couple and lovely to see how good they know and how familiar they are with each other.


I’ve always been a fan of witnessing the first meetings, the chase and the start of epic relationships. And even though Holly and Jackson are already a couple, you still get the chance to see how their love developed in the first... and second place.

What’s special about Jackson is that he’s a time traveller. He is a confident, sweet and clever guy and I love that the story is told from his perspective. There should be more male narrators like Jackson!
It’s not only that TEMPEST is written in 1st person point of view, but also that the action sets in almost immediately. I felt sucked in by TEMPEST, the characters, relationships, language and events- to summarize everything. And the action never slowed down so that I felt constantly engaged.

You can imagine it must be hard to keep your time travel ability hidden from public and even your family and girlfriend. Then from one second to the other everything changes when Holly is shot and Jackson stuck in the year 2007. He can’t get back to the present and has to meet his best friend Adam and his girlfriend Holly for the first time again. It’s a stunning and at the same time frightening fate that Jackson is confronted with.

The role of his family, father, mother and sister is really mysterious and I was more than eager to decipher their intentions and roles in the whole time travel system.
Jackson’s friend Adam covers the position every intelligent time travel mystery adventure needs. He is the brain. Adam supports Jackson with his knowledge and researches the whole process of time travelling with small experiments involving Jackson. Kind of diary entries support the scientific character of Jackson’s and Adam’s time travel experiment.
I sensed a greater conspiracy throughout the entire read and was surprised to see who and what powers are behind all that!

With Jackson jumping through time without having a fixed spot, the special events become even more important. Jackson visits places and persons of his past and things get more complicated with each jump. Julie Cross invented a lot of complex strings of time, action and thought. There’s a lot to explore in TEMPEST!


Time travel has always been a topic that fascinated me and I already read other books about it like THE TIME TRAVELLER’S WIFE and RUBY RED. TEMPEST could be named my recent favourite in YA time travel attempts! 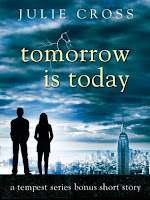 * Don’t miss the prequel to TEMPEST, TOMORROW IS TODAY.

* Read an excerpt of TEMPEST here.

* For further information about Julie Cross and her books visit www.juliecross.blogspot.com

* Thanks to Netgalley and Macmillan Children's Books for giving me access to the e-ARC of TEMPEST!
Posted by Miss Page-Turner at 6:12:00 PM