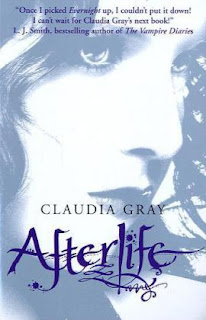 Title: Afterlife (Evernight #4)
Author: Claudia Gray
Publisher: HarperCollins
Publishing Date: March 2011
Length: 364 pages
Genre: YA, fantasy, paranormal romance
Source: Finished Copy from Publisher
Bianca and Lucas have always believed they could endure anything to be together. When a twist of fate not only transforms Bianca into a wraith but also turns Lucas into a vampire – the very creature he spent his life hunting – they are left reeling. Haunted by his powerful need to kill, Lucas can turn to only one place for help… Evernight Academy. But with the vampire leader of Evernight waging war on the wraiths, Bianca’s former home has become the most dangerous place she could be, despite the new powers her ghostly transformation has given her. A battle between wraiths and vampires looms, and Bianca and Lucas face a terrifying new reality. Is their love strong enough to survive after life?
Summary by Goodreads

AFTERLIFE continues the story of Bianca and Lucas seamlessly after HOURGLASS ended with a major cliffhanger. Without much pre-talk or summaries of former events, the actions of AFTERLIFE are put in motion.
The focus of this final instalment in the EVERNIGHT series is not just on Bianca's part of the story, but also on Lucas' new life and the constant transformation process he must go through.
This time the perspectives of our protagonists are reversed and characters- as readers- get the chance to see what it's like to be in the enemy's body. It is fascinating to examine Lucas' and Bianca’s new lives and find out how they cope with an existence that has never been their decision, the existence of a creature that has once been their enemy.
AFTERLIFE is further represented by many secondary characters, whose personalities aren’t extraordinarily stunning, but who still got a lot of potential and initiate progress with several appearances throughout the story.
Claudia Gray’s writing style is consistent and as good as in her previous works. With the final novel in the EVERNIGHT series Claudia Gray crosses the line between life and death as never before. It also features an interesting comparison of two concepts of paranormal creatures, vampires and ghosts and offers new perspectives and elements.
Although it's the last novel in the EVERNIGHT series, AFTERLIFE isn't as spectacular as expected. The end left me with mixed feelings and didn’t really satisfy me, because it is more neutral than a brilliant finish.
Nevertheless AFTERLIFE is a great book, because all the characters we've meet and learnt to love over the previous three novels come together again for this final episode, for the final battle against enemies and fate.

Though AFTERLIFE doesn't develop its action the way that I hoped for, it is an absolute must for EVERNIGHT fans. Find out if Lucas and Bianca end up together or if death finally gets its way.
I am already looking forward to Claudia Gray's next book, it will definitely find a bookish new home on my shelves. 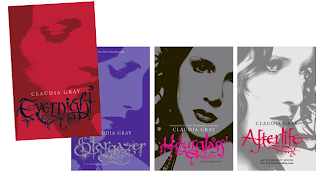 * For those of you who haven't already started this series, check out its first novel- EVERNIGHT!
* Make sure to visit www.claudiagray.com


* Thanks to HarperCollins for sending me a copy of AFTERLIFE by Claudia Gray!
Posted by Miss Page-Turner at 5:21:00 AM