Today Loni shares her favourite book(s) from her home country the US with us. She loves spending time with her cute family and also a lot of books. There is no book she recommended that I wouldn't read, Loni has got a fantastic taste!
Don't forget to visit her blog A Casual Reader!

I was excited when Sarah asked me to be a guest on her blog! Here are a few question she asked me to blog about, so I hope you find this interesting and I don't bore you to death!
Which is your favorite US book and why?
She asked that it be an author that is not too well known and I immediately knew who I'd choose. I'm selecting, Salvaged by Stefne Miller. Here is a brief synopsis: 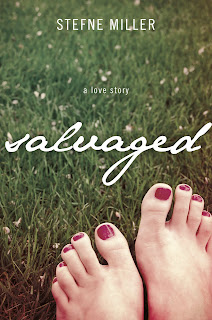 Attie Reed should have died in the wreck that stole the lives of her mother and best friend. But her life was spared. Why?  When Attie moves to Oklahoma to stay with the Bennetts for the summer, she hopes she has left her nightmares behind. But her battle is far from over, and Riley Bennett steps forward to help her fight the nighttime monsters. As the battle wears on, Riley begins fighting monsters of his own: his feelings for Attie. And Attie realizes she must begin to face the monsters of the night herself if she wants to conquer them for good. Can Attie's life be salvaged?
Salvaged is described by some as "Christian Fiction" being that Jesus is a main character and being that I am a Christian, I did look at this more from a Christian aspect. However, I also think that no matter what your religious beliefs are, it's the overall message this story tells that is more the focus. It's inspiring and motivating and it's a beautiful a love story. Steffne actually has a great post on her blog concerning this and you can read it here  if you'd like.
What I liked so much about this story are the emotions. Feeling and actions are real and genuine and it's the only book I've read where I cried at the end simply because of the happiness and warm fuzzy feelings it brought me. Not only was the story itself amazing but I felt like I learned something. I felt like I wanted to be a better person after reading this and Riley is so amazing. Don't get me wrong, he has some struggles of his own too but in the end I would wish for my daughters to find someone as amazing and respectable as Riley Bennett. I would most definitely encourage everyone to read Salvaged if you haven't had a chance to. Religious beliefs aside, it truly is a wonderful, inspiring story. Also there is a sequel coming out in April- "Rise". I'm positive it will be just as amazing as Salvaged.

What makes US literature so special?
This is a tough question for me because I can't say I've read many foreign books to compare with US books. I would say that with America we have such a wide range places, such as cities, state, state parks and popular places that it makes it a little easier to place your self in a particular setting chosen by the author. But honestly, if the author does a well enough job at describing something, you feel like you've been there anyway!

If you got the chance to write an US themed novel, what would it be about?
Actually, I am writing something on the side. Purely for myself as a challenge but who knows if it will turn into anything more than something I'm proud of finishing. I don't write everyday and I have to be in a mood for it but its fun and had made me have even that much more respect for authors who do write books. It isn't easy and it is a lot of work!
My book is set in the state of Virginia. Clair is a runaway, running from an abusive step-father and alcoholic mother. No one believes what her step-father is trying to do to her due to his high profile status and influence and she's tired of putting up it.  So she avoids them all by running away. She's 17, and not yet legal. If she gets caught on her own, she'll be sent straight back to her parents. Then there is Alex, who was once a run away too. Now he's getting back on his feet but is dealing with his own past issues. Alex and Clair's paths cross one night, thus beginning their relationship but their past come back to haunt them and in ways they could have never imagined.
Well, thank you Sarah for letting me be your blog guest and I hope I didn't bore the daylights out of anyone!  I really look forward to reading more books from other places around the world because sometimes, when you can't travel to these places, reading about it is the next best thing!
Loni, be sure you didn't bore us for one single second! The US might not be the most exotic place on our tour, but I still love hearing you talk about its literature and possibilities. You know, I will read SALVAGED and of course the story you are writing!

Want to be part of the post series and featured with your own international book tip? Shoot me an email at goldie-mail(AT)web(DOT)de!
Posted by Miss Page-Turner at 12:21:00 PM