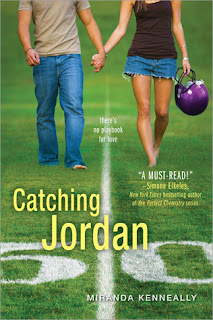 What girl doesn't want to be surrounded by gorgeous jocks day in and day out? Jordan Woods isn't just surrounded by hot guys, though-she leads them as the captain and quarterback of her high school football team. They all see her as one of the guys, and that's just fine. As long as she gets her athletic scholarship to a powerhouse university. But now there's a new guy in town who threatens her starting position... suddenly she's hoping he'll see her as more than just a teammate.

I never even watched a football game before reading CATCHING JORDAN and now I have absolutely no idea why. The story is already so good, but the football parts make it even better. There are hot football players, practices, actual games, football jargon and the team dynamics we got to experience. Authentic and fun!

Isn’t it impressive that Jordan Woods is captain and quarterback of an entire football team? A male football team. With totally hot and gorgeous boys!
And that position is definitely not undeserved. Jordan is a great player even though she is a girl…because she is a girl.
A big part of the story is about Jordan fighting for her chance to get an athletic scholarship and play college football. She is very committed and fights hard for her dream and she’s got exactly the combative spirit I’m always looking for in a female protagonist.

But as in everyday life it isn’t directly easy for Jordan to pursue her dreams. Yep, throw in some prejudices and obsolete ways of thinking. A girl and football aren't equal for some of the characters in CATCHING JORDAN. Her father isn’t happy about the situation of his daughter playing football and even other professional people involved with the sport don’t take Jordan serious. Time to proof them wrong, right?
This story is so much about overcoming the obstacles life throws in your way and just being the person you’ve always wanted to be. CATCHING JORDAN encourages boys as girls to follow their dreams, regardless how hard it might seem.

So now that Jordan is the only girl in an all male football team, the story is very much about being friends with boys, too. There should totally be more stories about that. Jordan’s friends and fellow team pals are JJ, Henry and Carter. Probably the most fun and sexy and best friends a girl could have. I loved them as individual characters with very different personalities and their interactions in the group. I’m glad that a girl being their captain wasn’t an issue at all. And I really liked how Jordan was already an integrated and highly respected member of the team. The boys are so cute when they want to protect Jordan!

Family. Friends…what’s missing? The looove story. And CATCHING JORDAN has it, believe me. A really good one by the way.

Starting into the new playing season with a new member on the team romantic feelings start invading Jordan’s thoughts. And Jordan’s thoughts do not only circle around winning the next game anymore, but boys. Boys?! Especially the boys on her team! Here lies another conflict that starts occupying Jodan’s mind from now on.
There are two boys for Jordan and I want to keep it simple: Henry won my heart!! He is such a cheeky and adorable boy, the best friend and partner a girl could wish for and I really really wanted Jordan to finally see that love has been right in front of her eyes all the time. You are going to love the super cute romance. There are sweet kisses, denial, missed opportunities, hesitant approaches, secret admiring and finally, finally getting the boy who’s utterly in love with you for just the right reasons.

Miranda’s writing is fabulous and full of energy! Not even a ravenous giant of a football player could have losened my fingers from CATCHING JORDAN for a second after I started it. Read it. Read it soon!

5/5 ***** CATCHING JORDAN- Touch down! Miranda Kenneally scores with a dynamic and super sweet story that's all about doing what you love and finding a way to be with the one you love in return.

CATCHING JORDAN is the awesome debut by Miranda Kenneally that I counted to my favourite YA contemporaries after only a few pages into the story. I’m sure you will love it!

* To read an excerpt of CATCHING JORDAN click here.

* Click here  for the book trailer of CATCHING JORDAN.

* You want to meet Miranda Kenneally? Check out her event schedule.

* For further information about Miranda Kenneally and her books visit www.mirandakenneally.com

Thanks to Miranda Kenneally for today's love note. It's soo Henry:) Here you've got it with Miranda's explanation. Enjoy!

Love Note from Henry to Jordan

I just don't think Valentine's is something Henry would necessarily take seriously. :) He's a romantic guy every day of the week. So in that regard, I think he'd make a joke of Valentine's, thus I give you this...

Dear Jordan -
I want you bad.
Love,
Henry
PS - Can your mom make us fried chicken for our Valentine's Day dinner?
Aaand a little teaser about two characters in Miranda's next book:

Dear Parker,
Happy Valentine's Day. You might know this. You might not... I've been in love with you since 8th grade. But I'm not sure you're the same person anymore...
-- From a certain character in STEALING PARKER, coming in October 2012