Back from blogging break

I'm finally back from my blogging break! And I have to admit it was kinda hard to sit down and write a full blog post after weeks of reading only and (sadly) neglecting the blog.
I've been home for a week now and spent the two weeks before in Denmark. Vacation was as relaxing and awesome as always. It was Amy's first vacation and after the first few hours of irritation about the new house she just loved it and claimed the beach as her new favourite place on earth. 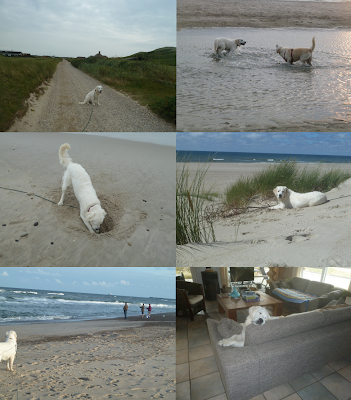 Her days were spent walking the humans. She played a lot with older dogs and was gloating that she was the fastest dog there. Her afternoons were mostly spent digging holes the size of a car, or nibbling sticks. And especially after stalking these poor anglers she was so tired she fell asleep on the couch. 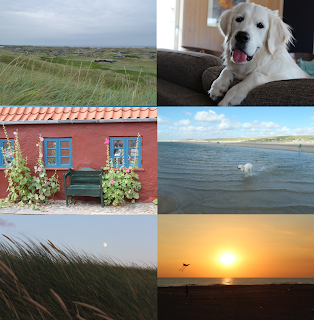 Again we stayed in one of the cute little cottages located on the west coast of Denmark, only a few feet separating you from the wide sandy beach.
The weather wasn't the best, wind and rain dominating our two weeks there.
We still went to the beach every time we could and went on walks but I was more than happy to concentrate on reading. I read 7 1/2 books and approximately 2800 pages (and reduced the books I'm behind on my Goodreads challenge to only five!) which is a decent number for me.

I started the first book about ten minutes after we'd left town and mananged to squeeze in a little reading time during the car ride and in between uncomfortable naps. After finishing the fourth VAMPIRE ACADEMY book the night of our departure I couldn't wait to pick up the fifth book. And so the first book I read in Denmark was SPIRIT BOUND by Richelle Mead.

The VAMPIRE ACADEMY story got better and better with each new book added to the series. After a quick visit to Crystal Cove and the love story of Anna and Tyler in MOONGLASS by Jessi Kirby, I devoured the nearly 600 pages of  LAST SACRIFICE in only a few days.

My holiday reads were made up of a mixture between dark, thrilling books and sweet YA contemporaries. DANGEROUS GIRLS, THE DISTANCE BETWEEN US and TEN were not exactly highlight reads but pretty decent and enjoyable.

Then I started my first Sarah Dessen book. About time! I really liked it and am looking forward to read many more of her books in future. When it was time to leave again I had only managed to get halfway through SUCH A RUSH (I had a few issues with this book but enjoyed it nevertheless). 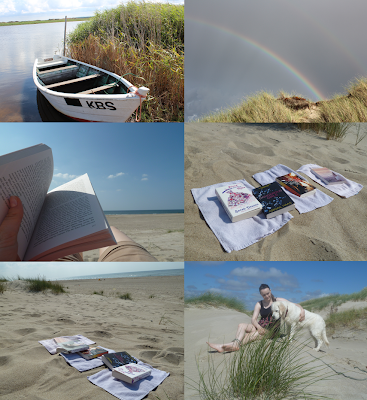 Here are a couple more pictures of the vacation and Amy and me chilling with the holiday reads on the beach (yep, I totally brought tiny beach towls for them, just for the pic of course LOL).

So I'm back with renewed energy and am set on spending much more time on blogging and commenting.
My goal is to write reviews immediately after finishing a book and putting it aside. I'm applying a new slightly different review scheme and am working on a new book quiz.


You can also expect a giveaway very soon since I had my three year blogoversary while I was on vacation. Can you believe it? 3 entire years of blogging and sometimes I still feel like I'm new to the business when reviews sound clumsy even after the fifth revision. But then I'm amazed that I get emails by fellow readers and bloggers asking for my advice! It feels insane and incredibly great at the same time and I'm so thankful for every small conversation on Twitter, book talk on Goodreads or comment on my blog (picture teary eyes here). They (and you) enrich my life. To many more years of friendship and book talk!! 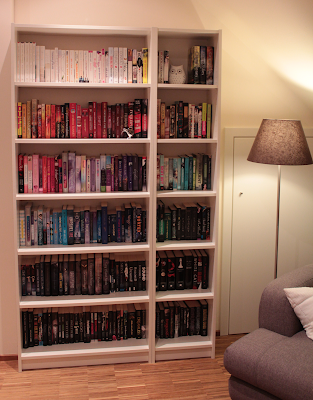 * After the vacation I had a manic cleaning day and felt like re-organising my bookshelves. I hate that my series were left separated that way but I do love the pretty color sorting scheme.

* I watched a ton of movies. The Great Gatsby - never read the book but liked the movie even though it wasn't Leo's strongest performance. Argo - tough political conflict, outstanding Affleck. Wreck-It Ralph - possibly the wrost Disney movie ever.

* And I started Breaking Bad. Never thought it'd be a series for me. Didn't know it would be that hilarious. Starting season 3 now.

* I freaked out about the Divergent movie trailer. Who didn't?!


* Two days ago I read a book that I now consider my favourite of 2013 (beside PIVOT POINT by Kasie West). THESE BROKEN STARS by Amie Kaufman and Meagan Spooner was the best book I have read in quite a long time actually. The love story is...OH MY GOD, you'll LOVE it!! It doesn't come out until December 2013 but you should make sure to pre-order it as soon as possible!

Tell me how you spent your summer and what awesome holiday reads you found!