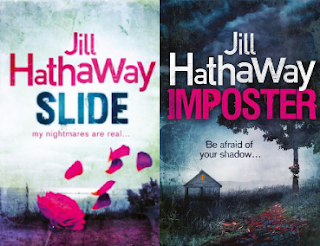 Vee Bell is certain of one irrefutable truth--her sister's friend Sophie didn't kill herself. She was murdered.

Vee knows this because she was there. Everyone believes Vee is narcoleptic, but she doesn't actually fall asleep during these episodes: When she passes out, she slides into somebody else's mind and experiences the world through that person's eyes. She's slid into her sister as she cheated on a math test, into a teacher sneaking a drink before class. She learned the worst about a supposed "friend" when she slid into her during a school dance. But nothing could have prepared Vee for what happens one October night when she slides into the mind of someone holding a bloody knife, standing over Sophie's slashed body.

Vee desperately wishes she could share her secret, but who would believe her? It sounds so crazy that she can't bring herself to tell her best friend, Rollins, let alone the police. Even if she could confide in Rollins, he has been acting distant lately, especially now that she's been spending more time with Zane.

Enmeshed in a terrifying web of secrets, lies, and danger and with no one to turn to, Vee must find a way to unmask the killer before he or she strikes again.

Sliding into other people's bodies, seeing what they are seeing. Now that's something I'd like to read more about I thought when I picked up my copy of SLIDE.
Vee can't controll when it happens or who she's sliding into. Whenever she touches an object with lingering emotions or energy in it, she is pulled into the person that's it's connected with. You can imagine numerous unintended slides lead to a story with many short or fragmented chapters.

The sliding itself was an imaginative ability to have. In combination with Vee throwing herself into the murder investigation this book had everything I was looking for in a book. Well, hypothetically. The crime case itself was only okay. The amount of details and background info were kept to a very basic level and I would've been thrilled for more twists and turns.

No surprise at the boy front. Because there is a new one who's just come to town. And things are starting to heat up fast between Vee and that new boy Zane. Their relationship reaches its peak after only a couple days. And so their romance was on the average side, too. Can't compete with major YA contemporaries.
The other boy in Vee's life is Rollins, her best friend. I always tended to hope for a romantic relationship between these two who had known each other for a long time. In the first book he's remained more of an inscrutable character but we get to see more of him in IMPOSTER.

SLIDE is on the short side of YA books, with only around 250 pages. So consider IMPOSTER an invitation to learn more about the characters and what's behind Vee's sliding talent.
Really surprising is that despite the story's shortness Jill Hathaway still found time to include deeply emotional affecting issues into it. The general story definitely worked for me, the only thing I would have wished for were a few more details and bigger developments in the relationship department.


IMPOSTER comes along with a new crime case and introduces a very creepy element to Vee's life. Someone is sliding into her body and she is waking in the oddest places. Those incidents were so thrilling and I was eager to find out who did this to her and why she was targeted, I read this sequel in only a few hours.
Just like the first murder the solution of the second case wasn't predictable at all. Jill thought of an original way to solve them,  just the built-up should have been longer.

SLIDE poses as a quick read for fans of main characters with exceptional abilities. I believe the crime case was supposed to be the center of Vee's story but there was rarely a moment it held my undivided attention. Its sequel IMPOSTER that would've offered the opportunity to look at the characters' portraits, relationships and issues on a much deeper level continues more or less on the same cursory writing course SLIDE kept. Despite Vee's engrossing gift it always felt like the story was holding back and didn't exhaust its full potential.

the two SLIDE books you might also enjoy PAPER VALENTINE by Brenna Yovanoff, FRACTURE by Megan Miranda and THE BODY FINDER by Kimberly Derting. They have chilling murder cases and/or gifted heroines to keep you on the edge of your seat. Violet and Jay from THE BODY FINDER are one of my favourite couples in YA.

* Want to read more by Jill? Her YA contemporary novel EVERY LITTLE THING is coming out in 2014.

* You can watch the book trailer here.

* For further information about Jill Hathaway and her books visit www.illscribbles.blogspot.de

* Thanks to Harper Collins Children's Books for sending me SLIDE and IMPOSTER for review!