Book Review: Under the Never Sky by Veronica Rossi 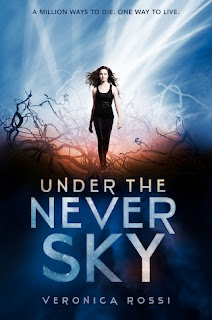 WORLDS KEPT THEM APART.
DESTINY BROUGHT THEM TOGETHER.

Aria has lived her whole life in the protected dome of Reverie. Her entire world confined to its spaces, she's never thought to dream of what lies beyond its doors. So when her mother goes missing, Aria knows her chances of surviving in the outer wasteland long enough to find her are slim.

Then Aria meets an outsider named Perry. He's searching for someone too. He's also wild - a savage - but might be her best hope at staying alive.

If they can survive, they are each other's best hope for finding answers.

When I picked up UNDER THE NEVER SKY and was a few pages into the story I thought I'd never get accustomed to this strange new world Veronica Rossi created. People living in domes, prevented from going to the outside and 'living' their lives in realms, virtual worlds to entertain their minds, never experiencing life in its full expanse. On the outside there are Savages who live in tribes without any culture or morals as Aria has always been taught.

Aria's story is set long after humanity as we've known it was destoryed. The world collapsed in on itself and so called Aether storms have taken over most of the land, leaving fiery destruction in their wake. Fights for territories with other tribes as the struggle to gain power within your own are inevitable.
The clash of advanced technology and tribal, very basic formations of life was a subject I often had to renegotionate throughout the story because the gap between them was so enormous.
A rather minor thing that irritated me were the remainders of ancient culture that popped up at some points during the story. Old pieces of art or inventions are mentioned by Aria and I kept wondering about how she or anyone else would have had the time to remember or cherish them when entire cities were being destroyed. Who cared for such things when people fought for survival? It's very trivial but they somehow weakened the authentic feel about the world building I slowly and steadily warmed up to.

The dual point of view from which the story was told, Aria the Dweller and Perry the Savage, came unexpected and it took me some time to get used to Perry's side of the story for I feared I wouldn't be able to pay much interest to his tribal life. I was surprised myself that it didn't took very long for me to get completely sucked into the story and I wouldn't have wanted to miss one of their perspectives on the events.
I'm always for love stories between very extreme characters who represent total opposites and different worlds, so you can guess Aria and Perry's love story was what made UNDER THE NEVER SKY an even more fabulous read. They fight, they curse and hurt each other, therefore the making up in the end is even that much more pleasurable.

UNDER THE NEVER SKY felt so much like a miniature version of Game of Thrones. With only one story to follow instead of numerous different ones but no less compelling in its intensity.

Just make sure to be found by Perry, he's the best guide! It's been a long time since I've discovered a dystopian world as unique as Veronica's world under the never sky. Aria, Perry and their friends (Roar is one of my favourites, too) will be staying with me for a long time and I could barely contain my excitement to press the order button for THROUGH THE EVER NIGHT.

“She absorbed the terror and beauty of him and his world. Of every moment over the past days. All of it, filling her up like the first breath she'd ever taken. And never had she loved life more.” ― p. 252

UNDER THE NEVER SKY you should also enjoy GRACELING by Kristin Cashore, THE GIRL OF FIRE AND THORNS by Rae Carson and TOUCH OF POWER by Maria V. Snyder (my favourite out of the three). All of them are offering you another fantastical world and a strong woman with a quest.

* Can't get enough? Read ROAR AND LIV, the prequel to the UNDER THE NEVER SKY series!

* Click here for an excerpt of UNDER THE NEVER SKY.

* For further information about Veronica Rossi and her books visit www.veronicarossi.com