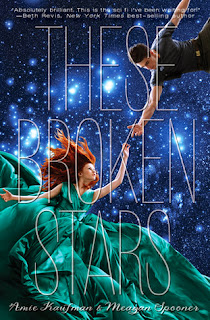 
It's a night like any other on board the Icarus. Then, catastrophe strikes: the massive luxury spaceliner is yanked out of hyperspace and plummets into the nearest planet. Lilac LaRoux and Tarver Merendsen survive. And they seem to be alone.

Lilac is the daughter of the richest man in the universe. Tarver comes from nothing, a young war hero who learned long ago that girls like Lilac are more trouble than they’re worth. But with only each other to rely on, Lilac and Tarver must work together, making a tortuous journey across the eerie, deserted terrain to seek help.

Then, against all odds, Lilac and Tarver find a strange blessing in the tragedy that has thrown them into each other’s arms. Without the hope of a future together in their own world, they begin to wonder—would they be better off staying here forever?

Everything changes when they uncover the truth behind the chilling whispers that haunt their every step. Lilac and Tarver may find a way off this planet. But they won’t be the same people who landed on it.

Lilac LaRoux and Major Tarver Merendsen are both on board of the gigantic luxury spaceliner prophetically named Icarus when it's thrown out of hyperspace and crashes into the nearest planet. Lilac and Tarver are from different social spheres but after the crash they are the only two people left or so it seems and they have to team up in order to survive and find a way to call for help.
Think of THESE BROKEN STARS as a YA version of Titanic set in space and add a ton of extra dangers, special effects and feels. No reader can say no to that, right?

Amie and Meagan's version of a future galaxy holds many miracles that have you marvelling at their invention and sheer existence. People have colonised numerous planets, changed the texture and feel of so many things and travel through space in the blink of an eye. The story's level of individuality is set very high. Technical details, the construction of the Icarus, the complexion of the new land and each step of Lilac and Tarver's journey, it all felt so complete and well-connected.

Chapters alternate between Lilac and Tarver's perspective. Don't you think men in uniform are extremely sexy? Let me introduce you to Major Tarver Merendsen then, the epitome of a YA hero who makes your heart race and takes your breath away. Despite his simple upbringing he is intelligent, strong and has become a trained soldier and war hero. On the new planet Tarver is not only responsible for his own life, he sees it as his mission to protect society princess Lilac LaRoux at all costs.
A relevant part of THESE BROKEN STARS is about the differences in their upbringings and the planets they are living on (yes, two lovers who are from different planets!). Lilac sees what it means to be out in the world and without her posse for protection. Lilac and Tarver are exploring the new planet they landed on. Is it inhabitable? What dangers and discoveries are awaiting them?

They are both busy following their own goals and intentions. Tarver to get through this mission without being fooled by the heir to the galaxy's richest industry mogul.
And Lilac...well, let me just say it takes her some time to see clearly again after years of false pretense and hiding behind conventions.
Every subtle change in their ways of thinking and their feelings towards each other was present and poured off the pages right into my heart where there's just so much love for them as individual characters and as a couple. Tarver and Lilac are an explosive combo and their love burns as bright as the brightest star. I have read so many love stories with intimate scenes that often felt simply insufficient whereas Tarver and Lilac's love story was never less than fulfilling and just perfect. Both teens can't fully escape the sadness of their pasts but what would life be worth if they hadn't something wonderful to live for in the future? Hopefully each other!

The romance of the manly soldier and the delicate society girl is a sexy and powerful one. Their rough edges made them the most fascinatingly interacting characters I have encountered in a very long time. Heated kisses had me swooning, strange happenings really scared me to death and the more emotional parts of their story had me sobbing through the night. Oh my, all the feels! And there is a ton of them! THESE BROKEN STARS became my favourite book of 2013 in only a matter of a few hours.

Sometimes there are key scenes or moments that make you feel at home in a story. Characters you can identify with, places so exciting you want to dive in head first and words so compelling you read them in a kind of trance. THESE BROKEN STARS did that to me and every page made me think: 'Yes, this is exactly my kind of story. I don't want to just read it, but make it my new home and live in it forever!'

5/5 ***** THESE BROKEN STARS –  Space adventure galore of the most splendid kind, an irresistible romance and a universally captivating storyline. Whatever you are looking for in a favourite YA read in 2013, Amie & Meagan's debut has it all and beyond!

The first book in the STARBOUND series is a paramount debut thanks to Amie and Meagan's stellar writing. Exceeding all expectations, THESE BROKEN STARS is a story so finely fabricated you will feel the magic of stars and with it an entirely new futuristic galaxy come to live and unfolding on every single page. Lilac and Tarver's story is resplendent, an emotional firecracker and the galactically good start to a new space trilogy! It's going to be a long long wait until its companion is coming out in 2014.


*This quote is taken from the Netgalley provided by Disney Hyperion. It is subject to change before its publication and will be checked against the finished copy when it comes out in December 2013!

THESE BROKEN STARS you might also enjoy ACROSS THE UNIVERSE by Beth Revis, the first sci-fi YA novel set in space I ever read and loved. CINDER by Marissa Meyer isn't set on a spaceship directly but the earth has been reformed and interplanetary travel has been made possible. FOR DARKNESS SHOWS THE STARS by Diana Peterfreund is a Persuasion by Jane Austen inspired story set in space. It's on top of my TBR pile!

* Make sure to add the second novel in the STARBOUND trilogy to your wishlist!

* For further information about Amie and Meagan visit www.amiekaufman.com and www.meaganspooner.com.

* Thanks to Disney Hyperion and Netgalley for the chance to review THESE BROKEN STARS!