Book news days are always the best, don't you think? It's also a nice change to just see the news pop up on Twitter and not be connected with a super exclusive reveal in 24 hours on a big news website.

And the internet did it again. Broke Maggie Stiefvater's website very effectively when the news were out. Now you can read all about her new companion novel to the SHIVER series here.

What Maggie has been referring to as her WhitePantsNovel before has a name. Her new book with the title SINNER (THE WOLVES OF MERCY FALLS #3.5) is a standalone, set in L.A. and it's about Cole St. Clair and Isabel Culpeper. I can't tell you how brightly I am buzzing with excitement right now! Cole and Isabel have always been my favourite characters of the SHIVER series (yep, not Sam and Grace), they are one of the hottest couples in YA and they SO deserved a continuation of their story. SINNER will be released July 1st 2014. Read the official description below.

Q! I'm hoping they do something very different and modern with the SINNER cover. Or would you like for it to fit with the rest of the SHIVER series?

A standalone companion book to the internationally bestselling Shiver Trilogy.

Sinner follows Cole St. Clair, a pivotal character from the #1 New York Times bestselling Shiver Trilogy. Everybody thinks they know Cole's story. Stardom. Addiction. Downfall. Disappearance. But only a few people know Cole's darkest secret -- his ability to shift into a wolf. One of these people is Isabel. At one point, they may have even loved each other. But that feels like a lifetime ago. Now Cole is back. Back in the spotlight. Back in the danger zone. Back in Isabel's life. Can this sinner be saved?

"Legions of fans -- myself included -- have wanted Maggie to return to the world of Shiver, and now she's found an ingenious, sexy, utterly compelling way to do it," says David Levithan, VP/Publisher and Editorial Director, Scholastic Press. "This isn't so much a re-visitation as it is a reinvention, with Maggie taking readers to many places they've never been with her before. There is nothing quite so amazing as Maggie Stiefvater at the top of her game."

Author Maggie Stiefvater says, "For me, finishing the Shiver trilogy was a bittersweet moment -- I knew that I wouldn't be returning to Mercy Falls once Sam and Grace's story was over. But Cole and Isabel still lurked in the back of my mind. Both of them were only half-fixed at the end of the trilogy, and I wanted to know if they could be fixed the rest of the way."

And the other fabulous announcement is about a cool new spin-off series to the bestselling BEAUTIFUL CREATURES books by Kami Garcia and Margaret Stohl. The first book DANGEROUS CREATURES (DANGEROUS CREATURES #1) will be released on May 6th 2014 and will be all about Link and Ridley. Read all about it plus an interview with the authors on MTV Hollywood Crush.

A new series returns to the world of Beautiful Creatures. Some loves are cursed...others are dangerous.

Ridley Duchannes will be the first to tell you that she's a bad girl. She's Dark. She's a Siren. You can never trust her, or even yourself when she's around. Lucky for her, Wesley "Link" Lincoln can never seem to remember that; quarter Incubus or not, his heart is Mortal when it comes to Ridley. When Link heads to New York City to start a music career, Ridley goes along for the ride-and she has her own reasons. As if leaving small-town Gatlin for the big city, trying to form a band, and surviving life with a partially reformed Siren isn't hard enough already, Link soon learns he has a price on his head that no Caster or Mortal can ever pay.

Kami Garcia and Margaret Stohl, the #1 New York Times bestselling coauthors of Beautiful Creatures, are back and casting another magical spell. Their signature mixture of mystery, suspense, and romance, along with a dash of fun and danger, will pull fans in and leave them begging for more.

The joy about additional books to a believed to be finished series is always great. Announcements of companion novels or spin-off series are just as welcome. Fans want their favourite stories to find a satisfying end, see their beloved characters ride into the sunset. Yet, there is always that tiny piece of us wondering. Wondering about what happens after the happily ever after. A feeling that never lets us label a series as truly finished, eternally concluded. In our minds the stories are going on, and sometimes when authors don't quite feel like leaving their worlds or returning to them we are lucky to be the first to get our hearts stolen...again.

The Mortal Instruments by Cassandra Clare

What had been planned as an original trilogy evolved into a six-book series. I remember being on vacation when I watched the live chat with Cassandra Clare announcing three more books and I was beyond thrilled about that news. The new books are different than the first ones, not in a bad way, and the series is still one of my favourites. Need a reason? Duh, Jace is all I'm saying.

The number of nearly 60.000 ratings on Goodreads for the first book in the Bloodlines series is pointing out the pretty obivious. People had been waiting for a chance to spend more time in the world of Richelle Mead's vampire creations and alchemists. This spin-off series following alchemist Sydney and Moroi darling Adrin will be told over the course of six books. The sixth and last book in the series will be out in 2015. 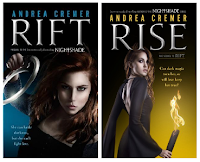 
Rift and Rise are both part of the prequel series to Andrea Cremer's famous Nightshade world. Books continuing the story rather than looking back and at what was before are more common I assume. Nonetheless Andrea Cremer fans were awaiting both books no less enthusiastically. 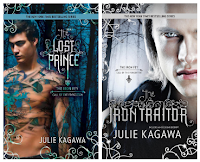 The Call of the Forgotten by Julie Kagawa


Also in 2012 we got the first of three more books in the The Iron Fey series by Julie Kagawa. It follows the original series' main character Meghan Chase's brother Ethan. Picking relatives of original main characters or fan favourite secondary characters is the best way to get readers involved and adding the new books to their wishlists. One reason to start such a spin-off series can often be found in readers hoping to catch glimpses of their characters of interest from the original series.


Stories I wish continued with a spin-off series/ additional books

#1
Across the Universe by Beth Revis

Despite all previous reservations and doubts the The Across the Universe series became one of my all-time favourites. The last book was very emotional and I bet I'm not the only one hoping for a spin-off series. I imagine the new story to be set on our earth and we are following a character who is determined to find out what happened to the Godspeed population.

The Body Finder by Kimberly Derting

Four books in a series. A pretty good number and a lot of pages to cover the many different crime cases Violet has found herself involved with. Still, not enough for the entire story to be convincingly wrapped up. Violet and Jay's story isn't finished and Kimberly Derting fans surely won't be giving up on a fifth book in future.

This one I'm pretty sure won't be continued. Lauren Oliver is a very independent and artistic author and the ending of Requiem fits her one-hundred percent. It's just this Alex and Lena fan that can't stop wondering what happened to them after the walls were taken down.


Q!     What do you think about SINNER and DANGEROUS CREATURES? Have you put them on your wishlist already? And if you could somehow compel one author into continuing one (finished) series which would it be?