Book Review: From What I Remember by Stacy Kramer & Valerie Thomas 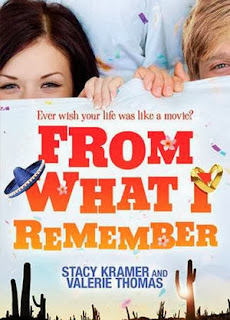 KYLIE: MEXICO WHAT? I should be putting the finishing touches on my valedictorian speech. Graduation is TODAY, and is this a wedding band on my finger.

MAX: It all started with Kylie's laptop and a truck full of stolen electronics. Okay, it was kind of hot, the way she broke us out like some chick in an action movie. But now we're stranded in Tijuana. With less than twenty-four hours before graduation. Awesome.

WILL: Saving Kylie Flores from herself is kind of a full-time occupation. Luckily, I, Will Bixby, was born for the job. And when I found out she was stuck in Mexico with dreamy Max Langston, sure, I agreed to bring their passports across the border -- but there's no reason to rush back home right away. This party is just getting started.

LILY: I just walked in on my boyfriend, Max Langston, canoodling with Kylie Flores, freak of the century. Still, I can't completely hold it against him. He NEEDS me. It's even clearer now. And I'm not giving him up without a fight.

FROM WHAT I REMEMBER is the story of four teens who start their graduation day in a very unusual way. Kylie and Max are waking up in Mexico and it looks like they are married. Kylie's best friend Will probably just had the best night of his life and Max's girlfriend Lily is seething with anger. Their story is like the YA version of The Hangover. Unfortunately there's no hunt for clues or tracing back what happened the night before, but don't you just love stories that present you with an end result, leave much room for speculations and slowly unravel what had to happen for our characters to end up in their current situation? Rewind 48 hours and Kylie and her friends will fill you in on the rest.

Stacy and Valerie's second book is told from five different point of views. Kylie, Max and Will all have something to add to the recreation of the past two days. We learn more about each teen's life at home, their families and plans for their future.
Lily's story didn't give away too much about her life to acutally care about her. I had a feeling her perspective was only part of the story to add a second female main character and a new source for possible conflicts. I could have done without her POV as her issues and story remained mostly unresolved in the end.

Kylie has always kept to herself. She is studious and goal-oriented and not everyone knows how much fun she can actually be, except Will. Her flamboyant (and gay) best friend is always set out to protect her. He is kind of a stereotype but so free-spirited and hilarious there's only room for an occasional cringe because you will be too busy laughing. Kylie and Will are best friends and throw in movie quotes in their daily conversations all the time. So it's no surprise that each chapter starts with a new movie quote that fits the chapter's content.
Kylie and her younger brother Jake (his is the fifth point of view) are very close and it was very touching too see what his two days without Kylie felt like.
Max was an adorable love interest with one major turn-off, he couldn't once say what he wanted or stand in for his beliefs and the people he cares about. He's got a long way to go but the night with Kylie is his chance for change.

If it weren't for fate, the risky situations they find themselves in and the night away from (almost) everyone and everything they know, I don't know if Max and Kylie would have ever found to each other. In high school they never really took the time to find out who the other person was.
It was the seductive prologoue that had me hooked on FROM WHAT I REMEMBER. I had wished it would continue that way, but the love story wasn't as intense as the first few pages suggested it could be.
Their two days spent together are supplemented with debacles and unfortunate series of events but there's still time for some little romance. Luckily Max and Kylie get to spent the main part of the story on their own in a scenic Mexican city that serves as background to our colorful, crazy and reckless adventure of a night.

4/5 **** FROM WHAT I REMEMBER – An energizing and comical night to remember.

Fate (and Stacy and Valerie) sent Max and Kylie on a venturous trip to Mexico, a vacation from their old routines, showing them that one night can change everything. Currently there is no announcement about a new book by Valerie and Stacy but I'll keep an eye on their blog!

"I'm a total headcase."
"Maybe, but it's sexy. Really sexy."
Max flashes me a huge grin. God, he's gorgeous.
" So can we just be with each other and see what happens?"
" Yes. We can. We totally can," I say.
And then, without thinking too much about it, I climb on top of Max and slowly, very slowly, lean down until our faces are nearly touching. ― p. 265

FROM WHAT I REMEMBER you might also enjoy DITCHED by Robin Mellom telling the story of a crazy prom night. I haven't read 7 CLUES TO WINNING YOU by Kristin Walker, but its accumulation of catastrophes sounds just like Max and Kylie's story. THE DUFF by Kody Keplinger isn't as much about an unfortunate series of events as a very hot love story between two teens who prove that opposites attract.

* Click here to read an excerpt of FROM WHAT I REMEMBER!

* Read an interview with Stacy and Valerie about working together and movie quotes.

* For further information about Stacy and Valerie visit www.stacykramerandvaleriethomas.com