Coveresque feat. The Raven Boys by Maggie Stiefvater (US vs. French vs. German)

It's time for another Coveresque post, this week featuring THE RAVEN BOYS by Maggie Stiefvater.
The US cover creates a great contrast between its white background and the black, very dominant raven in the foreground. I really like the blue and red in its feathering. It's not one of those covers who could be confused with a similar cover. I can't think of one that looks like Maggie's THE RAVEN BOYS cover. Can you? 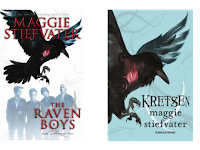 The German cover looks like the cover for a children's book. It's mysterious and darker than the US cover, but kind of youngish, too. There's no raven on the cover but an egg shape around its title. "Wen der Rabe läuft" translates into "Who the raven calls".
On the right you can see two more THE RAVEN BOYS covers, US paperback and Swedish.

My favourite is the US (and the paperback cover with the raven boys on it) because it's artsy and memorable just like Maggie Stiefvater.