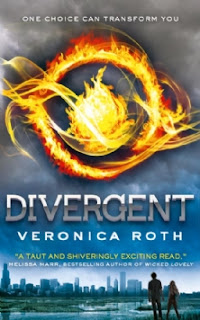 Title: Divergent (Divergent #1)
Author: Veronica Roth
Publisher: HarperCollins
Publishing Date: May 3rd 2011
Length: 496 pages
Genre: YA, dystopian novel
Source: ARC from Pulisher
In Beatrice Prior's dystopian Chicago, society is divided into five factions, each dedicated to the cultivation of a particular virtue—Candor (the honest), Abnegation (the selfless), Dauntless (the brave), Amity (the peaceful), and Erudite (the intelligent). On an appointed day of every year, all sixteen-year-olds must select the faction to which they will devote the rest of their lives. For Beatrice, the decision is between staying with her family and being who she really is—she can't have both. So she makes a choice that surprises everyone, including herself.
During the highly competitive initiation that follows, Beatrice renames herself Tris and struggles to determine who her friends really are—and where, exactly, a romance with a sometimes fascinating, sometimes infuriating boy fits into the life she's chosen. But Tris also has a secret, one she's kept hidden from everyone because she's been warned it can mean death. And as she discovers a growing conflict that threatens to unravel her seemingly perfect society, she also learns that her secret might help her save those she loves . . . or it might destroy her.
Summary by Goodreads

Attention, this is an eulogy, consider me DIVERGENT fan for life! This book is not as good as expected, but dimensions better!
Beatrice or Tris is the type of  plain character that is soon noticed as the honest and adoring girl that she really is. She has a super honest voice that I cannot but adore. For Tris her whole life depends on one single choice. Thinking about the events of DIVERGENT  it overwhelms me that they all depend from that one single moment.
For the male protagonist, let me use four simple letters: L-O-V-E!
DIVERGENT  has a character cast that covers all imaginable profiles, some are honest, some cruel, full of hatred. Then there are amiable , compassionate, strong, intelligent, brave characters. One should mean that one novel can not cover every single character type or segment of emotions, but Veronica Roth did a very good job by writing DIVERGENT. I fell head over heels for DIVERGENT and its revolutionary characters. It's one of the very first novels that totally got me without a love triangle.
At no point do the story, the actions or dialogues appear forced. In DIVERGENT affection is beautiful in its simplicity. DIVERGENT sets you under a current flow of electricity that feels so incredibly good.
Each word seems to be just in the right place, forming ideal sentences that together result in an adventurous read. In the middle of this action-packed novel that tries to cope with the raw instincts describing men, the coruptness of a society, we find ourselves attracted by a love story that is easy and endlessly beautiful at the same time.
Veronica Roth has a sense for the perfect interaction between time,space and characters. I can honestly call her one of the best present YA authors, because she finds the perfect balance between natural romantce and nerve-racking action.
Veronica Roth is one of my new favourite authors, she is highly-qualified, her writing is super engaging and her words deeply touching and electrifying. Her writing talent is realised 100 %.
This novel has not one single page that not had my full and undivided attention. Word for word stole my heart. If I talked about this novel in a chat, the wide emoticon palette would not be sufficient to describe my experienced emotions while reading this novel.
When I start thinking about books I wish I had written myself because of their pure brilliance, DIVERGENT  immediately pops into my mind. This world is so well-constructed, I wish I would live in it. Want to know what DIVERGENT stands for? Dedicated-intelligent-romantic-gigantic-engaging novel to crave!

1) we enjoy the thrill of heights
2) all good things are four;)
3) it's simply electrifying
4) we love this new fascinating universe and all factions for their special talents
5) of the numerous different faces that can be found among our new favourite character cast

A debut novel you won't forget too soon. When some people think of dystopian novels as the black-white bookish TV, DIVERGENT needs to be praised as the HD version of them all! I am impressed by its diversity and joviality. DIVERGENT  is the best novel I've read in 2011, and so far this have been many fantastic books!

* You can read the first 100 pages of DIVERGENT here!
* Want to learn more about DIVERGENT's factions? Click here!
* Read the Q&A with Veronica Roth here.
* Make sure to visit www.veronicarothbooks.blogspot.com
* Thanks to HarperCollins for sending me a copy of DIVERGENT by Veronica Roth!
Posted by Miss Page-Turner at 1:31:00 PM