Book Review: The Distance Between Us by Kasie West 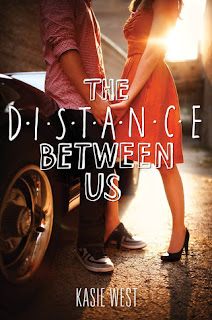 
Seventeen-year-old Caymen Meyers studies the rich like her own personal science experiment, and after years of observation she’s pretty sure they’re only good for one thing—spending money on useless stuff, like the porcelain dolls in her mother’s shop.

So when Xander Spence walks into the store to pick up a doll for his grandmother, it only takes one glance for Caymen to figure out he’s oozing rich. Despite his charming ways and that he’s one of the first people who actually gets her, she’s smart enough to know his interest won’t last. Because if there’s one thing she’s learned from her mother’s warnings, it’s that the rich have a short attention span. But Xander keeps coming around, despite her best efforts to scare him off. And much to her dismay, she's beginning to enjoy his company.

She knows her mom can’t find out—she wouldn’t approve. She’d much rather Caymen hang out with the local rocker who hasn’t been raised by money. But just when Xander’s attention and loyalty are about to convince Caymen that being rich isn’t a character flaw, she finds out that money is a much bigger part of their relationship than she’d ever realized. And that Xander’s not the only one she should’ve been worried about.

THE DISTANCE BETWEEN US, as its title so skillfully indicates, is a YA novel dealing with problems inflicted by class differences, prejudices and secrets. Setting is a small town at the west coast inhabited by quite a number of people with status. One of them is Xander Spence, heir to an hotel empire. And our story starts when he walks into 'Dolls and More' one fine day to find slightly annoyed,  master of sarcasm Caymen behind the counter.

A doll shop must be the weirdest place for a love story to originate, so that award definitely goes to Kasie West. Just as Caymen, whose mother owns the shop, dolls creep me out to a certain and slightly unhealthy extent and they weren't exactly helping me to get in a  romantic mood.

Feigned disinterest and a surprising instant attraction are the foundation for a relationship between two teens from two very different parts of town. Caymen is helping her mother with her shop whenever she can to help paying the bills. She and her mother live in a small apartment above the selling floor. Xander is a rich boy who surely knows about his good looks and the effect of his family's money. Sometimes he appears to be living in a different world with his super expensive clothes and car park.
But he isn't as dumb as some might think. He doesn't let himself be controlled by his money and obligations, Xander has a mind of his own. And he is the one who sees Caymen's exceptional personality the second he meets her. He is pretty good boyfriend material.
Together they are trying to figure out what to do with their future. Their amusive little meetings to try out various potential jobs bring them closer together. Their love story is one of the expected kinds, rather uneventful and without major surprises. There certainly are problems troubling young Caymen and her relationship with Xander but they are kept low on the overall potential drama scale.

Caymen's friendship with her best friend Skye and her boyfriend's band play a role, too. Just like her mother's business. More bigger seeming problems were only insufficiently wrapped in the end and too much time spent in the doll shop. Otherwise THE DISTANCE BETWEEN US is a finely written, distracting holiday read to brighten your beach day with Caymen's dry sarcasm (to which I could relate to very very well).

3,5/ 5 ***/* THE DISTANCE BETWEEN US – A breezy and elating, slightly predicatble YA contemporary debut.

After reading PIVOT POINT, Kasie West's mind-blowing debut earlier this year, I had high expectations for her first YA contemporary story and felt partly let down. Caymen and Xander are cute as a couple, but wouldn't make my list of most memorable YA couples. I'm still a huge fan of Kasie West, I'm just more enthusiastic about her fantastical and thrilling than her stories solely focusing on the romance.

And then the plane jerks again, and it might have been my imagination, or my weak legs, but I could've sworn that instead of bracing me with that hand on my waist, he actually pulled me forward. Because now I am in his lap, my hands still on his shoulders.
"Hi," he says.
"Sorry."
"For what?"
"For the fact that you are such a big flirt." ― p. 201

THE DISTANCE BETWEEN US you might also enjoy  KISS CRUSH COLLIDE by Christina Meredith, MY LIFE NEXT DOOR by Huntley Fitzpatrick and THIS IS WHAT HAPPY LOOKS LIKE by Jennifer E. Smith, all dealing with conflicts based on money or status or lack of it.

* Want to read more by Kasie? Her next YA contemporary novel ON THE FENCE will be out in 2014!

* Click here for an excerpt of THE DISTANCE BETWEEN US.

*  For further information about Kasie and her books visit www.kasiewest.com